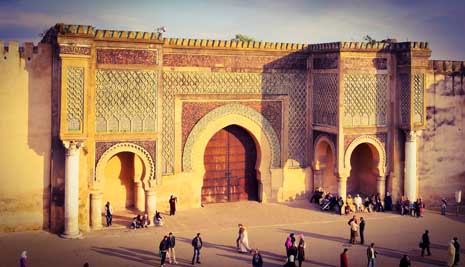 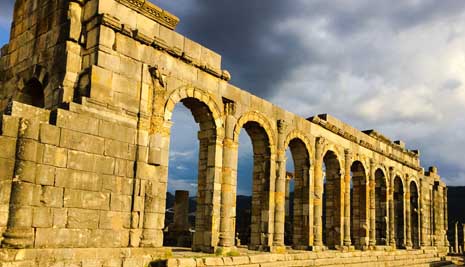 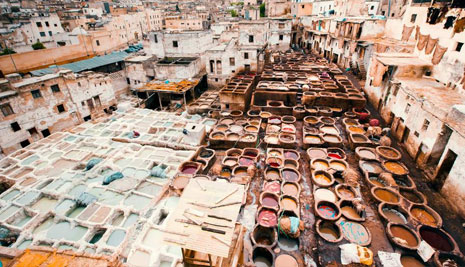 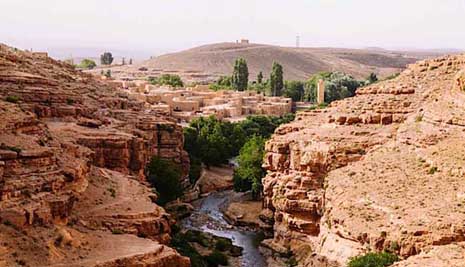 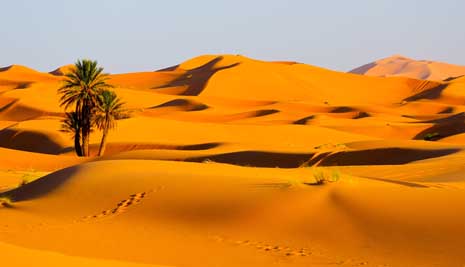 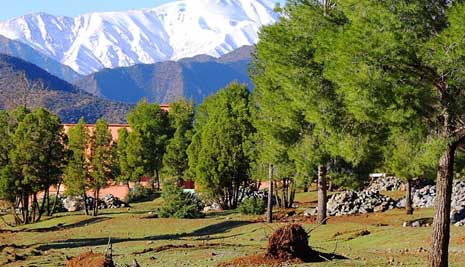 We will pick you up from the hotel and stroll around Casablanca’s Hassan II mosque one of the famous architectural masterpieces of Morocco. We will then drive to Rabat the current capital of the kingdom; we will pass by the Mechouar royal palace, the remains of Chellah Kasbah, Mohammed the fifth’s tomb and the Hassan tower.and you will spend the night there.

After breakfast in your riad, you will start travelling to Fes via Meknes and Volubilis. Meknes is another significant imperial city in Morocco, known as the Ismaili capital. You will see the famous gate Bab Mansour, the Sahrij Souani Bassin, and the Mulay Ismail Mausoleum. After lunch, your journey continues to the Roman city of Volubilis, where you will get a chance to see the wonderfully preserved original mosaics, Roman road, and city layout. As we travel through the Moroccan countryside, we will pass by the Holy City of Moulay Idriss. You’ll get to Fes at the end of the afternoon and check in to your riad in the Medina. Overnight at riad.

You will have a very experienced guide to show you all the outstanding aspects of the city; you will be able to explore its ancient souks, narrow alleys, vintage mosques and towering Minarets. Fez is one of the most important cities of the kingdom. And it is the first city the Idrissid dynasty established. Fes is the spiritual, cultural, scientific and artistic capital of Morocco. You will visit the ceramic’s cooperation and the tannery to marvel at the traditional handicraft pf Morocco.

As we today drive by the Atlas Mountains we will stop by Ifran the Switzerland of Morocco, and then we pay a visit to Azrou in its Cedar forest where we will watch its wide diversity of monkeys and apes. We will have lunch in the middle of Atlas Mountains where we can admire the beauty of Midelt.

After that, we will continue our trip through Ziz valley, and make a quick stop at its narrow and overwhelming gorges. Once we arrive to Merzouga we will find camels waiting for us to take us to our nomad tents, and as the sun sets we would be wandering the vast seas of sand of Sahara. As we arrive we will be met with a traditional and a very tasty tajine surrounded by charming people and a soothing music accompanying us. We will sleep in nomad tents under the starry sky.

The 5th Day: MERZOUGA AREA AND THE CAMEL TREK:

As daylight breaks we will have a tour to visit nomad families in their homes, visit also the Merzouga Oasis of palm trees. After that we will stop at Khamlia village home to many Malawian and Sudanese people. Then we will enjoy a beautiful concert of Gnawa whilst sipping delicious mint tea. Once we go back to the hotel we will find the camels waiting for us to carry over the high dunes of Erg chebbi, the trip would take 40 min, but it would be joyful and peaceful as we tour the vast seas of sand while the sun sets. When we arrive we will have a yummy delicious traditional meal under a starry sky. You will sleep in nomad tent for you to enjoy full nomad experience.

As soon as the sun rises make sure to get up and watch the beautiful scenery. Then we will return to the hotel, shower and take breakfast. After that, we will stop by Erfoud to visit the treatment plant for marble fossils. We will drive by the route leading to Todgha gorges, it overlooks the beautiful cliffs and giant palm groves. After having lunch in the route we will explore the Todgha gorges, the narrowest and highest canyon in Africa. We will also stop at Dades valley and Dades gorges where we will spend the night in.

Once we take breakfast in the hotel, we will stroll down the narrow gorges before the depart to Marrakech, as we drive we will pass by Dades valley, Kalaat Mgouna also known as the capital of flowers. Each year in May or June its local inhabitants host a ceremony the rose festival in which they crown young girls and celebrate their floral productions.

Our Morocco Imperial Cities Tour still proceeds as we go along the 1000 thousand Kasbah route, valley of roses. At lunch time we will stop at Ait Benhadou a small well known village for its cinematic location for movies like the Gladiator, Lawrence of Arabia….. It is also a UNESCO heritage site. After we finish exploring the exquisite site we will hit the road again to Marrakech via Tizi n Tichka mountain pass. As the sun sets we will be found in the heart of Marrakech and that would be the end of our services.

We will fully explore the beloved Marrakech today, most tourists prefer stopping by Marrakech before they leave. This charming is the perfect combination of both modern and traditional Moroccan print, you could see that in its buildings in the ancient medina, you can start off by paying a visit to Jamaa el Fna square, a unesco worldwide heritage site. You can have a freshly squeezed lemon juice from the aligned dozens of shops, and then observe the snake charmers, acrobats, storytellers, musicians….

Besides the square there are few recognizable museums like Dar sidi Said and Bahia Palace. You can also visit the Saadain tombs and have lunch there before we steer again to the Koutoubia Mosque although non muslims aren’t allowed to enter yet you still can marvel at the formidable architecture of the ancient civilizations, also there’s a lovely garden in front of it, if you are interested we can stop at the big malls or continue directly to Majorelle gardens the mesmerizing live nature that lays in the heart of Marrakech. And at agreed time we will drop you off in the airport and that would be the end of our services.

We invite you to spend a day in the beautiful and charming Essaouira. It used to be a Portuguese harbor and a port to many of its ships. Essaouira is the example of the combination of both Moorish and Portuguese architecture and art overall. The city is famous for its fine wood artifact, silver jewelry making, art galleries and jazz music festivals. It’s easy to see why Essaouira is often dubbed the ‘Jewel of the Atlantic’. This place has earned such a following that Orson Welles filmed Othello here in 1949. You can roam around the city’s narrow streets and marvel at every artistic aspect that is left from ancient civilizations. You can also visit the ancient port, medina and artistic complexes.

The last day of our journey will have ended by transfer you to the airport weather in Casablanca or Marrakech .And there our 10 Days Morocco Imperial Cities Tour from Casablanca will end.